Tag Archives: The Wizard of Oz 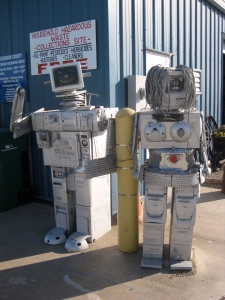 Goodbye Oz: The Tin Man has moved to Abilene, KS

In several polls to determine readers’ favorites from Dorothy’s traveling companions in THE WIZARD OF OZ, Tin Man is often in third place. Sometimes he even comes in fourth, behind Toto, her little dog.

But no matter. In this blog, this week, The Tin Man is our featured star. He’s in love! Really. We don’t know his girlfriend’s name, but you have to admit, they make a shiny couple. If we can’t quite see the attraction, we’ll chalk it up to love being blind. As Albert Einstein said, “You can’t blame gravity for falling in love.”

We can give the credit for the creation of Tin Man and Dotty (I named them that) to the staff of the Dickinson County Transfer Station near Abilene, Kansas. Their creation is not a monster made of body parts dug up in cemeteries like Mary Shelley’s FRANKENSTEIN, but a fun couple made of disposable electronics recycled into something new.

In THE WIZARD OF OZ, two of Tin Man’s lines make him my favorite character. The first is when he’s about to lose his friend Dorothy: “Now I know I’ve got a heart, ‘cause it’s breaking.” The other is his wisdom about the measure of love: “It’s not how much you love, but how much you are loved by others.”

That’s the quote I dedicate to you, Mom. You have always had a tremendous capacity to love others, to respect, accept, befriend and help them. And now, at 94 when your dementia, frailty and confusion limit the love you can offer others, the Karma of love has come full circle back to you. Can you feel the love, Mom? I hope so. It’s there.

Our nation dumps between 300-400 million electronic items per year, and less than 20% of that e-waste is recycled.  www.dosomething.org/actnow/tipsandtools/11-facts-about-e-waste

IF WE WALK FAR ENOUGH… 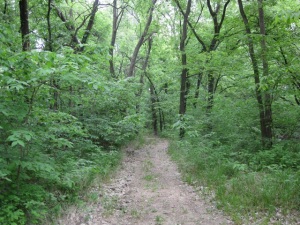 I was in third grade when I first saw THE WIZARD OF OZ  movie on television.  I remember being amazed and somewhat frightened by the  Kansas tornado, Dorothy and Toto waking up in a strange world of good witches, bad witches, munchkins, and flying monkeys; a yellow brick road leading to the Emerald City, and three strangers who travel with the girl and become her friends: Scarecrow, Tin Man, and Cowardly Lion.

It was years before I actually read L. Frank Baum’s novel and realized the many differences between his book and the movie version. Supposedly, there were over forty, but the surprising one for me as a reader was the difference in Dorothy’s character in Baum’s book. Dorothy was not the movie’s damsel in distress who needed to be rescued. She was a strong, capable young girl who took charge and rescued the situation, herself, and her friends.  “If we walk far enough,” Dorothy assures the others in the book, “we shall sometime come to someplace.”

The someplace they reach is Oz, but the guard blocks their way, saying, “Nobody gets in to see the wizard. Not nobody.”  That doesn’t stop Dorothy. Even though the Wizard turns out to be “a very good man…just a very bad wizard,” Dorothy doesn’t give up.

There have been countless essays written and theories debated about the characters and symbols in THE WIZARD OF OZ.  For instance, what’s more important to pursue, a brain, a heart, or courage? Or, which is the better lesson to learn, how to follow good or how to fight evil?

And finally, once you leave, can you ever really go home again? That’s the question you answered, Mom, by how you’ve lived your life in a spirit of love and acceptance. You saw leaving home as a natural, necessary journey for your children. Things would change and so would we, but of course we could always come home again; a part of our hearts would always be there, and our family would always welcome us back with open arms.

In the book, Dorothy’s slippers are silver; in the movie they are ruby red, but the message matters more than the color. She clicks them and says the magic phrase again and again.  She had the magic answer within her all along: “There’s no place like home.”

Filed under art, autumn lessons, Dementia/Alzheimer's, friends, movies, Things to be thankful for

Tagged as "If we walk far enough we shall sometime come to someplace, a brain and a heart and courage, a very good man but a very bad wizard, L.Frank Baum, pictures from pop-up book of THE WIZARD OF OZ, ruby slippers, silver slippers, The Wizard of Oz, There's no place like home