NOT A GOOD VISUAL

A more polite version of my response to the yoga improvement discussed on talk radio.

From our house in Colorado to my mom’s assisted living in southeast Kansas is a round trip drive of 1,300 miles.  When Jim is at the wheel we listen to sports or news.   When I’m driving, I search radio stations for interesting topics and call-in reactions.  I’ve mentioned several of the strange topics in previous posts, but the one I listened to on this trip home after Thanksgiving takes the prize.  Last place prize.

Briefly, the program I flipped to responded to an earlier topic argued on another station.  The basic theme was making regular activities more interesting during the holidays and into the New Year.  I tuned in to catch up on the conversation about spicing up Yoga groups and classes by doing naked yoga.   Lots of responses to that one, I tell you.

Now, to reset that December visual, here are some other interesting Christmas details.   For instance, did you know that one common superstition says that animals speak on Christmas Eve?   The elderly neighbor who told me this, spiced it up by adding that it was very bad luck to tease animals and try to make them talk.

The second superstition—shared by the same neighbor—was that when you get new shoes for Christmas, if times are hard for others, you should not wear the shoes until later.   Otherwise it might cause hurt feelings, and would tempt you to feel proud.  And pride goes before the fall, which is, of course, more bad luck.

Old shoes at Christmas work just fine, and they don’t hurt any feelings.

This last one is not a superstition, but a trivia question. What is still one of the most popular, enduring Christmas movies viewed during the holidays?   If you answered IT’S A WONDERFUL LIFE, you’re right.  Unless you agree with actor Tom Hanks, who says it’s ALL QUIET ON THE WESTERN FRONT, and he watches it every Christmas.   I’ve read Remarque’s sad, bloody war novel, and trust me,  it’s not anywhere on my must-see movie list. But we each have our own opinions. 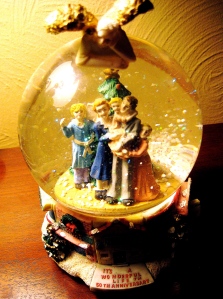 Which brings me to something my mother used to say before dementia clouded her thoughts.  I had a tendency to jump right in and argue about all kinds of things, and she repeatedly  told me that if someone said something I didn’t like or agree with, I didn’t always have to be rude or argue.  I could just shrug, turn away or go on with other things.

If she’d been riding with me and hearing the radio talk show on naked yoga, I wonder if she would have laughed, been shocked, argued with the topic…or just reached out and turned off the radio.  Probably the last…her version of turning away and going on with other things.

Filed under Dementia/Alzheimer's, just doing the best we can, lessons about life, making a difference, memories for great-grandchildren, Things to be thankful for

Tagged as ALL QUIET ON THE WESTERN FRONT, Alzheimer's and dementia, Christmas superstitions, It's A Wonderful Life, popular Christmas movies, responding to things you don’t agree with, responding to topics on the radio

45 responses to “NOT A GOOD VISUAL”