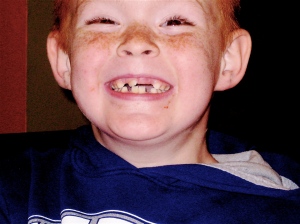 You don’t have to brush all your teeth–just the ones you want to keep. (All photographs by Marylin Warner)

To be safe, keep extra supplies on hand. Remember, possession is 9/10 of the law…(or something like that?)

Grandma’s favorite stories—and poems—have been about her grandchildren. She loved the cute things you all did and the sweet things you said. Almost three decades ago, you made everyone laugh with what we like to call your “Oral Hygiene” incident that Grandma later wrote about in a poem:

Mom and Dad were traveling—

A three-year-old grandson so dear

Was staying with Grandpa and Grandma,

Making their world bright with cheer.

“Where is your toothbrush?” asked Grandma,

After getting him ready for bed.

So Nic and Grandpa went walking

The next day, down to his home,

And soon Nic was brushing merrily;

His mouth was covered with foam.

“Are you sure it belongs to you?”

His answer was simple and true.

With his feet perched on the nearby stool,

And his smiling mouth dripping foam:

I just brought it here from home.”

(~a poem about her grandson Nic, by Mary Shepherd)

Grandma’s teeth are cracking and breaking now. It seems to be the normal progression of things for someone who is almost 96. She eats less food and it’s softer, and everything she drinks is served with a straw. But true to form, according to her caregiver Tammy, last week Grandma used the straw to blow bubbles in her milk! Inside the frail little grandma with advanced dementia, there’s still a hint of the happy playfulness she used to share with her grandchildren.

Molly and her little cousin Nic ~ she wanted him to be her little brother.

Fritz, Nic and Molly at Grandpa and Grandma’s house.

Tagged as Alzheimer's and dementia, Oral hygiene, poetry by Mary Shepherd, special memories, the importance of brushing your teeth

THE GIFT OF OBSERVATION 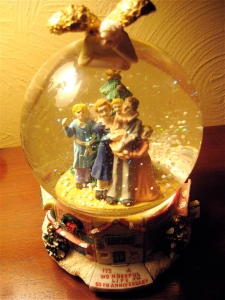 “Every time a bell rings, an angel gets his wings.” IT’S A WONDERFUL LIFE. (All pictures by Marylin Warner)

St. Lucia, “Bearer of Light”–do you observe the candles or the cupcakes?

Humor columnist Dave Berry wrote this about Christmas shopping:  “Once again, we come to the Holiday Season, a deeply religious time that each of us observes, in his own way, by going to the mall of his choice.”

Berry is right about one thing, each of us “observing” in our own way. Before the dementia, Mom, you were an astute and creative observer of life.  Then you would take out your tablet and pen, and your favorite observations became poems.

Today as others hustle and bustle around busy malls, searching for perfect gifts, I’m going to again share the poem you wrote in 1990 about the perfect romance you discovered in a shopping mall.

Surrounded by parcels I sat there,

On a bench in the shopping park mall.

I had finished my Christmas shopping

I could see him coming toward me;

His eyes sought mine all the while.

I tenderly watched his quick footsteps.

He held out his arms with a smile.

I glanced at the pretty young lady

Who possessively grabbed for his hand.

Did she know what a treasure she held there?

The greatest in all our fair land.

He fell on my lap and clung to me.

I patted his plump-diapered rear:

And a fifteen-month toddler so dear.

As you shop for those last minute, perfect presents this Christmas, may you have the gift of observation.

Years ago, in the early stages of dementia, Mom reading to her great-grandchildren.

Tagged as Alzheimer's and dementia, Christmas shopping, It's A Wonderful Life, poetry by Mary Shepherd, St. Lucia the Bearer of Light, Tags: humor columnist Dave Berry, the gift of love

WRITING OUR OWN WORDS

Corn stalks at evening. (All photos by Marylin Warner)

Snowy Pikes Peak. These two photos were chosen to fit with Mary Shepherd’s Haikus below.

Last week’s post—“Dancing In The Dark”—received many comments and emails about sleepwalkers who were understood or misunderstood, who were glad they had sleepwalked or wished they hadn’t.

You were sitting at the table, typing and retyping some of the stories and articles you’d written in long hand in your notebook.  You looked at me, smiled and shook your head. “No,” you said. “You should be the one to write about it. It’s your story.”

It took me many years to finally write about that night of dancing in the dark, and you were right. It was my story to tell, in my own time and my own words.

This week, because you can no longer write—nor even remember—your poems, I’ll post them here for you.  I’m just the typist, copying them from pages in your writing folders. The words are yours.

Flitting and dancing near earth,

The next poem is one of my favorites.  Six lines show your love and appreciation of all children.  In your opinion, the common ground among all people is their children. This poem later grew into more writing about children you had met in China.

There is common ground among people,

Wherever they are in this big world,

Who gaze into eyes of the children,

No matter the culture or color,

And see there the love of the parents

Who know that their children are priceless.

November 10 is Forget-Me-Not Day, Mom.  It was originally set up as a special day to remember family and friends who had grown apart or died during the previous year.  On this day and every day, although you have forgotten much of your life and your writing, your family has not forgotten you.