Scout: The Girl And The Dog

Nelle Harper Lee died today. Better known as just Harper Lee, she was author of one of my favorite novels, TO KILL A MOCKINGBIRD, and also the novel I liked much less, GO SET A WATCHMAN. In fact, I agree with the critics who argue that Harper Lee possibly did not intend for it to be published, at least not as it was.

When we adopted our puppy from the Humane Society in December, I named her Scout. That’s how much I loved the book character, the young girl with moxie, courage, curiosity and loyalty…and very little understanding of how the real world worked.   Which was pretty much a spot-on description of our puppy…then and now.

Charles Schultz, creator of PEANUTS, wrote that “Happiness is a warm puppy.” I would add that real happiness is a warm, potty-trained puppy, and we’re almost to that happiness goal. American radio and television writer Andy Rooney said, “The average dog is a nicer person than the average person,” and I can say with confidence that our puppy Scout is definitely going to be a nice person. Funny, too, plus very affectionate.

In appreciation to Harper Lee and TO KILL A MOCKINGBIRD, I sincerely thank her for the character Scout.  In the book, she says that Atticus “…told me to delete the adjectives and I’d have the facts.”     This is good advice in general, but also especially for writers.

Today, February 20, is LOVE YOUR PET DAY.   Dog or cat, bird or iguana, whatever your pet, this is a good day to show extra affection, share a few special treats, or make a contribution to your local animal shelter.    February 22 is WALKING THE DOG DAY.  Our Scout is still at the puppy stage, walking us, tugging the leash toward every sound, exploring everything in her path, and carrying sticks like trophies.  But sometimes, if we pause and try to see and hear the world as she does, it really is quite amazing.

So here I will close with another line by Harper Lee in TO KILL A MOCKINGBIRD:    “People generally see what they look for and hear what they listen for.” 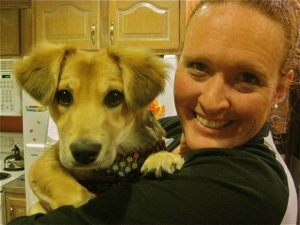 Our daughter Molly poses with Scout for the camera.

Filed under Books and book titles, Dementia/Alzheimer's, lessons about life, lessons for great-grandchildren, Special days in February, special quotations, Things to be thankful for

GET IT IN WRITING

Charlie Brown, of PEANUTS fame. (book picture from Wikipedia; all other pictures by Marylin Warner) 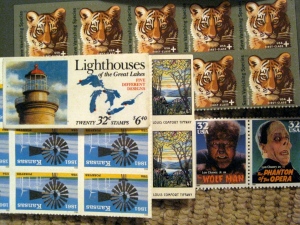 Stamps make mailed cards and letters extra special and come in an amazing assortment of choices.

Charlie Brown was the star character of the popular comic strip by Charles Schultz, PEANUTS, which began in 1950. Charlie Brown’s wishful thinking about being noticed by the little red-haired girl began a theme of love disappointments that lasted for more than five decades.   This is one of his most often quoted cartoon lines: “There must be millions of people all over the world who never get any love letters…I could be their leader.”

Charlie Brown didn’t want a phone call, a signature-only Valentine card, an email, a text or a twitter; he wanted a letter. Actor Keanu Reeves said this about a letter’s importance. “Letters are something from you. It’s a different kind of intention than writing an e-mail.”

Letters can be saved, to be read again and again. Greeting cards that arrive in the mail—especially with personal messages written inside—can be displayed on a bedside table or a shelf, reminders that someone, some-where still thinks of you and cares enough to stay in touch. Visit a nursing home, an assisted living, a hospital room or the home of an invalid to see how treasured the cards and letters are by those who receive them.

Valentine’s Day is still more than a week away. Plenty of time to buy a Valentine card, a greeting card of any kind, or even just write, type or print a letter to someone. One of my favorite quotes about happiness (attributed to numerous writers, including Joseph Addison) is this: “The grand essentials of happiness in this life are something to do, someone to love, and something to look forward to.”

For lonely, ill, or older neighbors, family and friends, or those who are getting forgetful or suffering from Alzheimer’s or dementia, I would change the last grand essential to this: “…a grand essential of happiness is something that shows I’m remembered.”

To be remembered is a treasured gift.

Grace wrote this message in chalk to her Grandpa.

Greeting cards are appreciated, too, if there’s a personal message written inside. 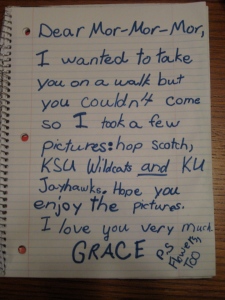 Before Gannon could write, he “practiced” with chalk on the fence.

Tagged as Alzheimer's and dementia, Charles Schultz, Charlie Brown, Joseph Addison, Keanu Reeves, Peanuts, The Grand Essentials of Happiness in This Live, the importance of being remembered, the importance of letters and hand-written notes and cards, Valentine’s Day

Love With a Capital M 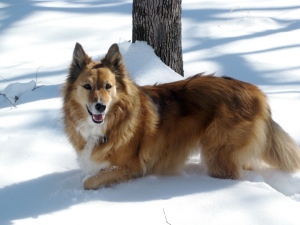 Maggie was the snow hike leader, followed by Jim and our grandchildren.

She wasn’t much for raking leaves, but she was always up for  rolling in them with the family.

She had the sweetest smile.

For more than twelve years, happiness for our family has been a warm and amazing dog named Maggie. With a capital M. When our son-in-law was a policeman in the little town of Canton, KS., he found her abandoned in the back yard after the renters had moved out. He and our daughter already had two large male dogs, but they knew immediately the Colorado couple who would agree to rescue this dog.

When we adopted Maggie, we had no idea that in the big scheme of our lives, Maggie would actually rescue us and prove what writer Roger Caras said, “Dogs are not our whole lives, but they make our lives whole.”

This was not the post I had planned to write today, but life had other plans. Yesterday afternoon, Maggie suddenly could not stand. Six weeks ago blood tests and a checkup showed everything was good, but in just a short time, a fast growing tumor formed between her ribs and against one kidney. Last night Jim and I sat with Maggie in the vet’s office, saying our good-byes and stroking her head until she quietly went to sleep.

My words are too sad to write, so I’ll borrow from Dean Koontz: “Once you have had a wonderful dog, a life without one is diminished.” Our lives are diminished without Maggie, but we’re ever so grateful for the many years she was our trusted and loyal friend and a beloved member of our family.

She led the way, and we happily followed. 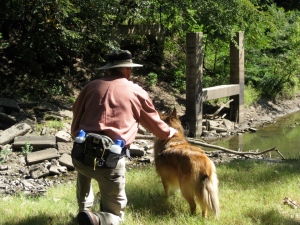 Maggie was born a Kansas dog, but she was Jim’s favorite Colorado hiking buddy.

At my mom’s recent 97th birthday, when things got too hectic, Mom closed her eyes, and Maggie when over to rest next to her.

Filed under Dementia/Alzheimer's, just doing the best we can, lessons for great-grandchildren, special quotations, Things to be thankful for