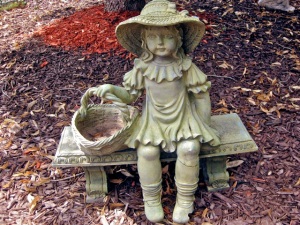 Statue of child with basket on stone bench. (All pictures by Marylin Warner)

April has two “special” days I don’t enjoy. First, I’m not a huge fan of April Fools Day and all the pranks that tumble in, once after another. But that’s behind us now. So, are you ready for tomorrow’s special day? Drum roll, please…

The flower of the day is Snow Crocus, and the recipe of the day is Lima Beans in Sour Cream (cook beans, drain, add salt, pepper and sour cream to taste.) Ohboy.

If you’re planning your own epitaph or an epitaph for someone else and need suggestions, here are some ideas taken from the words others have had set in stone:

“Murdered by a traitor and a coward whose name is not worthy to appear here.” ~ Jesse James’ mother, Zerelda, chose this inscription for Jesse’s tombstone.

“The highest tribute to the dead is not grief but gratitude.” ~ Thornton Wilder’s choice

“She did it the hard way.” ~ on tombstone of actress Bette Davis

“The best is yet to come.” ~ Frank Sinatra’s choice for his tombstone

~ in a Maryland cemetery: “Here lies an atheist. All dressed up and no place to go.”

~ on tombstone of twin infants buried together in Fort Scott National Cemetery: “They took their first breaths with God” (Their father was in the military; he and their mother are buried next to the infants.)

Whether or not you plan to have an epitaph, “Plan Your Epitaph Day” is a reminder to make your own final plans now instead of leaving them for others to handle later.

In closing, I thank you all for your kind comments and emails last week. My mother has been moved back to her apartment and is receiving excellent care and helpful medications. Mom does not have to plan her epitaph. She and my dad have a shared tombstone, and whenever the time comes she’ll be buried in the plot next to his. Their epitaph has already been set in the stone: BEST FRIENDS FOREVER

Unfinished lighthouse, stones set in concrete, waits at the edge of a field in Brown’s Park, Abilene, KS

71 responses to “SET IN STONE”