During their 67 years of marriage—before Dad’s Alzheimer’s and Mom’s dementia—my parents had one major disagreement, and it happened on their honeymoon. The conflict was a disagreement over what to do and where to go, and it turned out to have a huge affect on the rest of their lives.

They were staying in a cabin near the Big Thompson Canyon in Colorado. After packing sack lunches, canteens of water and a blanket to spread out on the ground, they took off on a private hike. They had gone less than two miles and were in a meadow at the base of a mountain when a storm hit. It was a fast, hard-hitting August storm with wind, thunder, and the beginnings of hail.

Dad pointed to the only refuge in the meadow, a huge tree with thick branches loaded with leaves. His plan was for them to huddle at the base of the tree and cover themselves with the blanket.  But Mom, a Missouri farm girl who’d seen lightning set fire to an old barn, said they should use the blanket as cover and take their chances hurrying back to the cabin.

Long story short, they argued back and forth, holding the blanket over their heads and eyeing the building storm. In the end, Dad grabbed Mom’s hand and they ran in the direction of the cabin. Minutes later a bolt of lightning hit the tree and destroyed it.

One of my favorite college lectures was titled The Clarence Reminder. It was named for Clarence, the angel in IT’S A WONDERFUL LIFE, whose job was to remind George Bailey that a world without him would have been a very different world.

The picture above is my parents’ engagement picture. It could have also been their last picture if they’d decided to huddle against the tree that day. The pictures below–with our parents holding me as a baby and my brother as a toddler, and then more than four decades later another picture of us as adults posing with them–would not exist. David’s sons, and my daughter and her children, also would not exist.

There’s a reason that lightning never strikes twice in the same place ~ it’s because no place is ever exactly the same after being struck by lighting. The same is true with people.  My mom said that after the close call with the lightning hitting the tree, she never forgot that every thing we do makes a profound difference in the lives and futures of ourselves and others. We can’t see all the dangers ahead or choose only the safe paths, but we can celebrate every day as precious.

THE CLARENCE REMINDER is a good lesson for all of us. 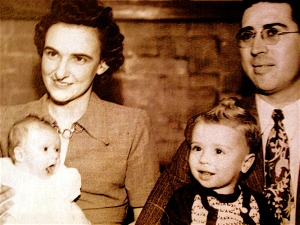 Filed under Dementia/Alzheimer's, just doing the best we can, lessons for great-grandchildren, life questions, Spiritual connections

Tagged as Alzheimer's and dementia, Clarence Odbody, It's A Wonderful Life, lightning, making decisions, my parents' big argument that affected the rest of their lives, THE CLARENCE REMINDER