And The Winner Is: ALICE

1996 – Molly at her high school graduation with her grandparents.

ALICE IN WONDERLAND ~ by Lewis Carroll

WHAT ALICE FORGOT ~ by Liane Moriarty

PUTTING ALICE BACK TOGETHER ~ by Carol Marinelli

For her starring role as mother of Jim Warner, the precocious, adorable 5-year-old boy she caught spitting. How did she respond? She seated him on the sofa, gave him a big bowl and said. “Fill it.”   He spit and spit and spit, until his mouth was dry, and there was only about a tablespoon of spit in the bottom of the bowl.

He had to sit for a while longer and keep trying to spit. Did it break him of spitting? You betcha!

Here’s to my mother-in-law, whose son grew up to be the best husband, father, grandfather, father-in-law, son-in-law, teacher, coach and overall wonderful man who to this day is a confirmed non-spitter. 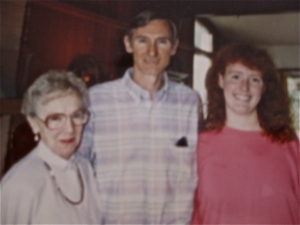 You’ve been gone a dozen years, Oma, but we still miss you. If you were here and my mother wasn’t deep in dementia, the two of you would sit together, have a glass of iced tea, and enjoy all the antics—and the love—of your combined families.

Jim teaching Oma to use a computer, 1988