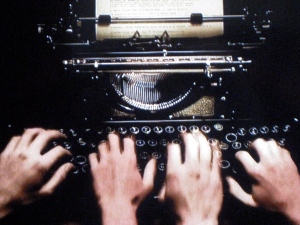 Picture this: the day after school lets out for the summer, a twelve-year-old daughter whines and complains she has nothing to do. The mother takes an envelope out of her purse. It’s filled with clippings from newspapers and magazines, and handwritten notes on scraps of papers. “Here it is,” she says, waving a piece of newsprint. “We’ll do this!”

The “this” is a contest looking for the best original Helpful Hint; the postmarked deadline is that very day, and the first prize is $50. She smoothes the rumpled newsprint on the kitchen table and says, “I’ll enter if you will.” And then as her daughter sits there moaning, the mother pours them glasses of tea and opens a tray of ice from the freezer. As she adds ice to the glasses, one cube falls onto the table.

The daughter looks at the cube and sighs. “I’ll try doing it, but only until that ice cube melts. And then I’ll quit and do something else.”

By the middle of the afternoon the ice cube has long been water on the table, and the girl and her mother are laughing and taking turns at the typewriter. The mother’s entry is about keeping an envelope full of contest opportunities so that whenever she needs something fun or different to try, the envelope holds the answer.

The daughter’s entry is called “Before The Ice Melts,” and it’s a simple timer. Before an ice cube melts, any boring, must-do responsibility or chore must be accomplished. Or if a babysitter wants to keep rowdy kids in line, all they have to do is sit at a table with an ice cube on a napkin in the center and do their homework or read a book or work on something without talking…but only until it melts.

The mother and daughter are both excited and telling jokes as they finish typing their entries (the daughter can only two-finger hunt-and-peck type, so it takes awhile), and then they fold their entries and put them in envelopes. They have twenty minutes to get to the post office, so while the daughter gets the stamps, the mother goes to get the entry information and address.

The rumpled square from the newspaper is gone! They search everywhere—the kitchen counters and drawers, under the table, in the typewriter room and even the bathroom—as the clock ticks.   The post office closes, and they still haven’t found it.

“Thanks, Mom,” the daughter thinks more than fifty years later, “for losing the address and ruining my chance to write the Great Ice Cube Initiative and become famous.”

But she smiles as she thinks this, wishing her wonderful, idea-rich mother had somehow sidestepped dementia and could laugh with her now as they watch ice cubes melt and talk about all the fun ideas they created together.

Filed under Dementia/Alzheimer's, Fort Scott Kansas, lessons about life, making a difference, memories for great-grandchildren, Things to be thankful for, writing, writing exercises

Tagged as alternate use for ice cubes, Alzheimer's and dementia, “Before The Ice Melts”, entering writing contests, using an ice cube as a writing prompt, what to do when you’re bored