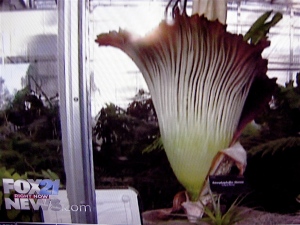 All pictures of the Corpse Flower in bloom and the visitor drawing the flower were taken at the Denver Botanical Gardens by Fox News photographers and shown on Fox 21 News.  They did a great job! 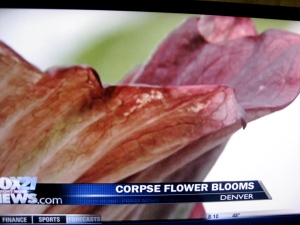 Ralph Waldo Emerson’s long “Hamatreya” isn’t his best known poem, but four of the words within it are very well known and often quoted: “Earth laughs in flowers.” It was one of my mother’s favorite phrases. Before her dementia, gardening was her much-loved early morning activity, and flowers were a joy to her.

It wouldn’t be Mom’s dementia, or the long drive between Kansas and Colorado, that would prevent me from taking her to the Denver Botanical Gardens this week. It would be the smell. And the long lines, with waits as long as five hours to get in.

The Amorphophallus titanum was in bloom for less than forty-eight hours, and it will be another 7-10 years before the “corpse flower” blooms again. The plant earned this nickname for a reason, and at the entrance to the Botanical Gardens, barf bags were available for the visitors. To give you a general idea, I’ll share two popular descriptions of the smell of the “corpse flower”: 1) a combination of limburger cheese, rotting fish, sweaty socks, and mothballs; and 2) the carcass of a chicken in a trash bag inside a metal trash can, left outside for a few days.

I think it’s safe to say that the Amorphophallus titanum isn’t on the top ten list of most popular flowers for wedding bouquets and Mother’s Day corsages.

Maybe Edna St. Vincent Millay had “corpse flower” in mind when she wrote these lines: “I will be the gladdest thing under the sun! I will touch a hundred flowers and not pick one.” Or maybe touching the “corpse flower” wouldn’t be a good idea either.

Flowers—like art, movies, books, politics and religion, etc.—are open to interpretation and valuable for personal reasons. The typical appeal of most flowers is usually the beauty, colors, scents and symbolism. But maybe the infrequency of the bloom of the “corpse flower” and the short life of the blossoms are popular considerations. Or maybe the novelty of the startling, staggering smell is also a draw. Mom always said that every thing God created has a purpose and fits somehow into the scheme of things, even if we don’t quite understand what it is.

I think she’s right. I just don’t know about the purpose of the “corpse flower,” except maybe as the prompt for writing a horror story. It does seem to be a possible flower of choice for zombies, tied with a wire and presented in a barf bag.  But I’m certainly open to other possibilities. 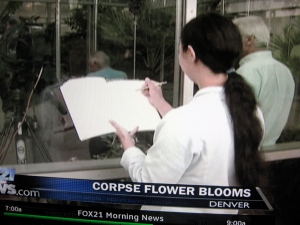 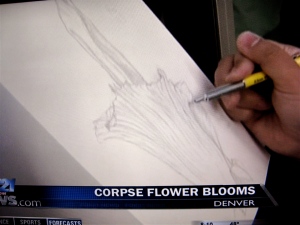