Scout: The Girl And The Dog 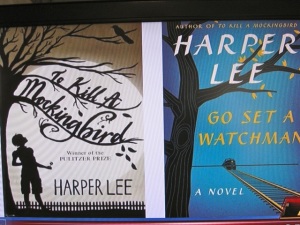 Nelle Harper Lee died today. Better known as just Harper Lee, she was author of one of my favorite novels, TO KILL A MOCKINGBIRD, and also the novel I liked much less, GO SET A WATCHMAN. In fact, I agree with the critics who argue that Harper Lee possibly did not intend for it to be published, at least not as it was.

When we adopted our puppy from the Humane Society in December, I named her Scout. That’s how much I loved the book character, the young girl with moxie, courage, curiosity and loyalty…and very little understanding of how the real world worked.   Which was pretty much a spot-on description of our puppy…then and now.

Charles Schultz, creator of PEANUTS, wrote that “Happiness is a warm puppy.” I would add that real happiness is a warm, potty-trained puppy, and we’re almost to that happiness goal. American radio and television writer Andy Rooney said, “The average dog is a nicer person than the average person,” and I can say with confidence that our puppy Scout is definitely going to be a nice person. Funny, too, plus very affectionate.

In appreciation to Harper Lee and TO KILL A MOCKINGBIRD, I sincerely thank her for the character Scout.  In the book, she says that Atticus “…told me to delete the adjectives and I’d have the facts.”     This is good advice in general, but also especially for writers.

Today, February 20, is LOVE YOUR PET DAY.   Dog or cat, bird or iguana, whatever your pet, this is a good day to show extra affection, share a few special treats, or make a contribution to your local animal shelter.    February 22 is WALKING THE DOG DAY.  Our Scout is still at the puppy stage, walking us, tugging the leash toward every sound, exploring everything in her path, and carrying sticks like trophies.  But sometimes, if we pause and try to see and hear the world as she does, it really is quite amazing.

So here I will close with another line by Harper Lee in TO KILL A MOCKINGBIRD:    “People generally see what they look for and hear what they listen for.”

Our daughter Molly poses with Scout for the camera. 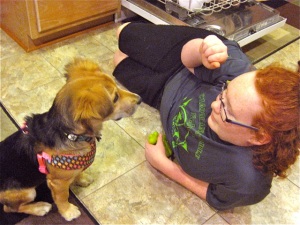 Filed under Books and book titles, Dementia/Alzheimer's, lessons about life, lessons for great-grandchildren, Special days in February, special quotations, Things to be thankful for

61 responses to “Scout: The Girl And The Dog”