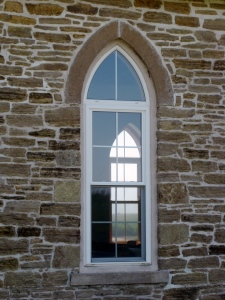 Kansas church window… look into the window, and out the “other side” (These two photographs by Marylin Warner) 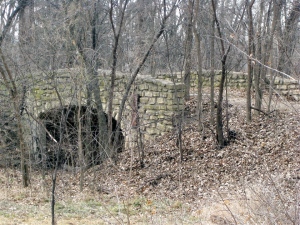 Stone bridge in winter, Brown’s Park, Abilene, KS.
The road may be less traveled, but the journey is not finished.

Unfinished Business is more than just the title of numerous published fiction and nonfiction books.  It’s also more than what actress Elizabeth Taylor left behind when she died before learning how to cook a hard-boiled egg. (Supposedly, that’s one of the things she wanted to learn to do but never did.)

Here are some other examples of unfinished business:

~ the one thing you always planned to do but never did;

~ the “last words” a person wanted to say before someone died…but waited too long to say them;

~ a painful event you never learned the truth about or the reason why it happened: the business that failed; the betrayal by a spouse or a friend; the person who died too young or who took his/her own life;

~ a crime you committed or a wrong you did against someone else…that has never been revealed.

Writer, poet and playwright Edna St. Vincent Millay wrote: “Where you used to be, there is a hole in the world, which I find myself constantly walking around in the daytime, and falling in at night…”  She was writing about a person who is gone, but if you replace the “you” with trust, resolution, justice, or whatever your unfinished business is, her description is still valid.  Unfinished business has a way of continuing to gnaw at us for a very long time.

When I was in junior high school, a man in our town died suddenly in a compromised situation. I heard the expression “he left a lot of unfinished business” and asked my mother what that meant. She said (paraphrased but true to context) that when you die you want to have lived your life without leaving unfinished business, so the people who love and trust you will be left with happy, loving memories instead of bad or hurtful memories.

This post is not about the unfinished business of politicians, countries, world leaders, or missing airplanes in unknown waters.  It’s about us, people who haven’t kept all the promises we’ve made to ourselves and others.  It’s about misplaced dreams and hopes and plans.

The good news is that Tuesday, March 25th, is “Old New Year’s Day” based on the old Orthodox new year. Anyone who missed a chance to make (or keep) a New Year’s Resolution that might finish some unfinished business has a do-over, a second chance.

And if that’s too heavy to consider, Wednesday, March 26th is “Make Up Your Own Holiday.”  It’s up to you how you use it.  As American songwriter and actor Eminem said, “The truth is, you don’t know what is going to happen tomorrow. Life is a crazy ride, and nothing is guaranteed.”

Norman Rockwell’s “Secrets”–if you decide to write about your unfinished business, don’t leave it where your brother might find it. Just saying…

Norman Rockwell’s “Feeding Time”–unfinished business can sneak up on you if you’re not paying attention.