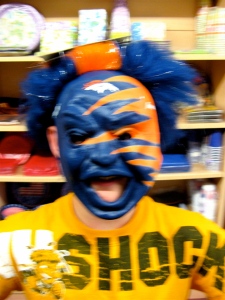 Are you DUMBSTRUCK? A Denver Bronco’s mask with a Wichita State Shockers T-shirt? Really? (Pictures by Marylin Warner) 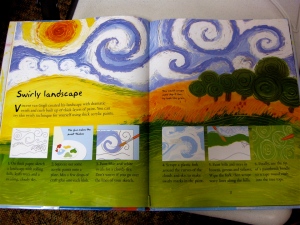 Instructions for painting van Gogh’s swirly landscape. Do what Goodland, KS did and paint your art replica 80 feet high! Challenge what your friends think they know about you.

Don’t confuse this post with the March Madness of college championship basketball competitions.  This post is about MID-MARCH Madness, the three strange “special” March day designations that all take place on the same day: March 15th.

Today is also “Dumbstruck Day.”  According to the description, you should prepare for something so shocking or surprising that you’re dumbstruck, unable to speak.

And finally, March 15th is also “Everything You Think Is Wrong” Day.  Did the Ides of March later influence the other two designations?  If you think about it, on this last day in Julius Caesar’s life, surely everything he thought was one way, actually turned out to be just the opposite. His best friend stabbed him to death, which also would have made Caesar dumbstruck…

To prove wrong what you probably thought you knew—and to make you dumbstruck—see if you can match the real, original names of these people with their later name changes:    (answers at end of post)

Last week we turned our clocks forward by an hour for Daylight Savings Time.  My mother understood why DST was necessary in war time, and maybe also during the oil embargo to conserve oil. But why the rest of the time, the back and forth, dividing the country?  “Why do we cause all that confusion?” she used to ask.  “There are still only twenty-four hours in a day.”

Oh, how I wish Mom’s dementia would fade away for an hour!  Actually, I often wish that, but especially now, when I’ve found something she would laugh at and enjoy. It would confirm that she wasn’t the only one who thought this was wrong.

This is supposedly a Native American Indian comment: When told the reason for daylight savings time, a wise old Indian said this: “Only the White Man’s Government would believe that you could cut a foot off the top of a blanket, sew it to the bottom, and have a longer blanket.”

Don’t be discouraged about the three “down days” of March 15th.  Take heart. Tomorrow, March 16th, is “Everything You Do Is Right” Day.  But, as my mother used to say, “Each day is what you make of it.” 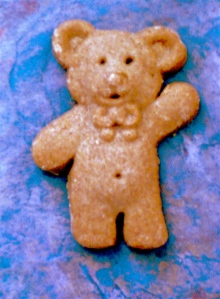 Delicious ginger-bear cookie. What if your child wanted to eat 3 or 4 of these? Keep your answer in perspective… 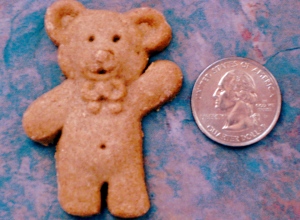 Next to a quarter, it’s not a big cookie. Hey, at least I didn’t use a headless chicken to make the point this week!

Tagged as "Dumbstruck Day", "Everything You Do Is Right" Day, "Everything You Think Is Wrong" Day, Daylight Savings Time, First Day of Spring, Ides of March, Julius Caesar, March 15th, March Madness, play the Name Game